Little Birdie Told Me "Birdday" Easel Card---Join the Excitement for Another Anything Goes Challenge at 613 Avenue Create!

"Jesus replied, “Very truly I tell you, everyone who sins is a slave to sin. Now a slave has no permanent place in the family, but a son belongs to it forever. So if the Son sets you free, you will be free indeed. I know that you are Abraham’s descendants. Yet you are looking for a way to kill me, because you have no room for my word. I am telling you what I have seen in the Father’s presence, and you are doing what you have heard from your father. ”“Abraham is our father,” they answered.
“If you were Abraham’s children,” said Jesus, “then you would do what Abraham did. As it is, you are looking for a way to kill me, a man who has told you the truth that I heard from God. Abraham did not do such things. You are doing the works of your own father.” “We are not illegitimate children,” they protested. “The only Father we have is God himself.” Jesus said to them, “If God were your Father, you would love me, for I have come here from God. I have not come on my own; God sent me. Why is my language not clear to you? Because you are unable to hear what I say. You belong to your father, the devil, and you want to carry out your father’s desires. He was a murderer from the beginning, not holding to the truth, for there is no truth in him. When he lies, he speaks his native language, for he is a liar and the father of lies. Yet because I tell the truth, you do not believe me! Can any of you prove me guilty of sin? If I am telling the truth, why don’t you believe me? Whoever belongs to God hears what God says. The reason you do not hear is that you do not belong to God.” (John 8:34-47)

Anyway, we have a new Anything Goes Challenge with an optional twist "Let's Celebrate" happening at 613 Avenue Create.  I decided to make a Birthday Easel card.  For this project, I used an image provided by one of our sponsors this week, Toadstool Printables, which is called "Serenity Prayer."  Our optional theme is "Celebration" so I decided to focus on the image and skip the serenity prayer sentiment that came with it.  I found some sentiments from my newest fave digi company, "From the Heart Stamps" and found two of the main sentiments in this project at the "Birthday Candle Birdbrain Set."  Anyway, for my main image, I colored it with my ProMarker/Prismacolor markers.  The base is Kraft that is cut and score to make a 5.5 inches square Easel card.  The two wonderful DP's are from my old set of papers from DCWV.  I die cut the fancy frame die from Spellbinder by running it through my Cuttlebug.  The flowers are from Prima, the buttons from Paper Studio, the ribbon and twine from my stash and I used a 1" circle punch from Fiskars to create the slot for the tag.  I stamped a swirl from Inkadinkado using Turquoise ink to enhance the background, added some Crystal Stickles to the flower and parts of the image and lastly, I took the time to do some regular and fancy stitches to this project.  I am very pleased and thanking the Lord for His inspiration. 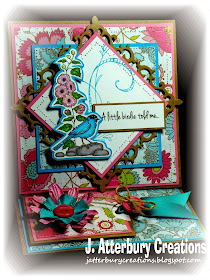 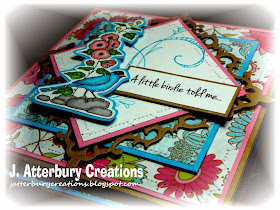 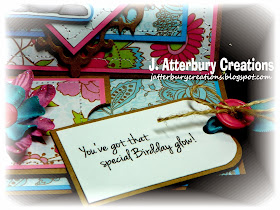 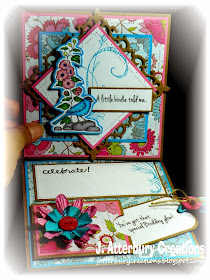 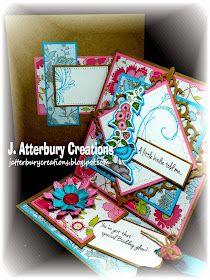 This Card is entered into the following Challenges:

There you have it, folks!  Don't miss the opportunity to join our Anything Goes Challenge with an optional Twist at 613 Avenue Create.  There's wonderful prizes awaiting the winners from our lovely sponsors for this week---My Whimsical Little World,  Poppyseed Graphics and Toadstool Printables.  Can't wait to see what fabulous projects you're going to highlight this week.  I hope you have a wonderful week filled with the divine inspiration of God's Word and be able to share the Hope you have in you to bring light to the dark places in your sphere of influence.  Would love to hear your comments too.   Hugs, always!
Jo Ann at 4:01 PM