Especially Made: Warmest Birthday Card---Join Our Anything Goes Monthly Challenge at 613 Avenue Create!

Advance Happy Heart's day, Crafty Peeps!  Last Sunday, we started our February Anything Goes Challenge at 613 Avenue Create with the optional theme, "My Whimsical Valentine." Go to our Challenge site and you will find many DT inspirations featuring the theme.  However, I decided to make  a very simple Birthday card and like me, you can opt out of the theme for an Anything Goes project.  What's important is to have fun with your creation.

Nowadays, I can't help but watch what's going on with the Freedom Convoy (in its third week now) originated by Truckers in our neighboring country of Canada.  If you are following my Blog post, you know that I am not only sharing Biblical Truths here but most especially in discussing the relevance of God's Word to what's happening to our country and the world as a whole.  Generally, many people don't get themselves involved in current events primarily politics and government unless it directly and personally affect their lives.  Draconian mandates that happen in other states or countries does not worry us much because we don't have to comply as of yet.  But you wake up one day and it's right up your alley. You're threatened with  fines, suspension, subjected to frequent testing to the extent of losing your job and be segregated for something you don't trust to be inserted to your body;  jabs that have proven to offer nothing for your health and protection. But even with that, many end up complying because let's face it, it demands great effort, strength and resources to fight back.  I've known several people who didn't like to take the jab but were afraid to lose their job and benefits.  As a Born-again (John 3:3) believer, God clearly told us that our real fight is not physical in nature. Ephesians 6:12 clearly states, "For our struggle is not against flesh and blood, but against the rulers, against the authorities, against the powers of this dark world and against the spiritual forces of evil in the heavenly realms." The Body of Christ (Church, Ekklesia) is here on earth not as bystanders  but to affect and lead the world with the rule of God.  And because Satan is the god of this world, he has in his disposal human beings that are bent to serve him which he placed in leadership to disguise themselves as champion of human rights and representatives of the people.  But in time, they'll show their true colors as they clamor for power and control.  The very people they claim to protect will suffer under their tyrannical rule by abandoning their promises and strangling the rights of the people.

When Adam sinned against God, all of humanity was plunged into Sin and Death under the bloodline of Adam.  We don't have any choice and are destined to suffer the wrath of God's judgment.  There's nothing we can do as human beings to change that until God sent His One and Only Son, Jesus Christ to redeem us from our bondage with Satan and free us from the claws of Sin and Death.  Though the penalty of Sin was paid in full by the sacrifice of Jesus at the Cross, only those who  placed their faith in the Cross of Christ will benefit from it.  Freedom comes from God and in that freedom is the right to choose! To choose to put our faith on the finished work of Jesus Christ on the Cross for our eternal salvation or to reject and mock the Only Way provided by God resulting to eternal death.  As a child of God, we have to keep in mind that our spiritual freedom didn't come cheap.

So it is under the same principle that we have to fight for our freedom in this world. We cannot allow government dictators to erode our rights under the guise of health and safety.  It is no coincidence that many demonic leaderships have used what they called "pandemic" to slowly condition their citizens to comply and then strip them of their right to choose what's best for them and their families.  They start by buying and recruiting people and trolls to propagate their lies (fake social media) while simultaneously using their power and influence to silence and cancel everyone who speaks the truth.  With the coordinated propagation of lies hour by the hour, many are easily deceived because they just accept whatever is in front of them instead of engaging in research to find out what's the truth behind the headlines.  People are waking up to this kind of suppression not only here in the States but in many countries around the world.  With ninety percent jab rate, Canada would be the last country I would think the Freedom Convoy would originate.  For two years, they took everything that their leaders shoved down their throats.  Aside from a few reports of people crying foul to the mandates, I've never heard or saw a significant outcry by it's citizen.  Many of them were duped to believing that there's a scientific support to the draconian measures passed on to them.  But beginning this year, as many countries have announced an end to their Rona mandates, many Canadians realized how abusive their leader is for it showed no desire to hear their concerns to end the mandates. They declared "enough is enough" and are willing to give everything (through peaceful means) to take back their freedom.  The demonic leaders all over the world are scrambling to do damage control. Canada encouraged many other countries in similar predicament to bond together that no amount of lies and threats could stop them from pursuing their goal which is freedom from Rona mandates.

And what can I say?  When we unite to push back the darkness and enforce the light, nothing is impossible with God.  While the Body of Christ is here, our responsibility is to be Salt and Light of this world.  For there will come a time when God takes us away from this world (Rapture of the Church) and all hell breaks loose (Tribulation Period).  The Bible is clear that it's going to happen because a just God will pour out His judgment to the ungodly who willfully rejected Christ and pledged their souls to serve Satan.  Be wise in your choices.  God's Word reveals to us the difference between righteousness and iniquity.  Spending the time to study the Scripture gives us wisdom to see through the disguise that leads to deception.  Freedom is always worth fighting for!

For this Card, I used an image from Art Impressions called "Birthday Wishes" and colored it using my Prismacolor markers and stamped the sentiments from the same set.  The base is a white, A7 card base with envelope from Paper Studio.  The DP is from my scraps and the fence border was die-cut using an MS Punch.  I added a couple of brads to complete my design. 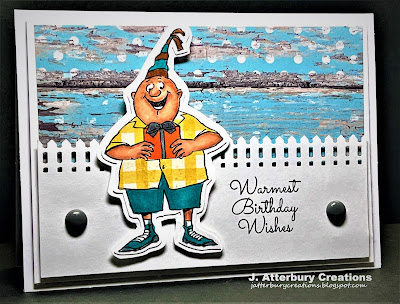 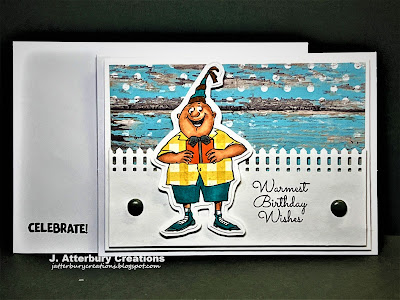 This is it for now, guys.  Make sure to join us at our neighborhood---613 Avenue Create---for an Anything Goes Challenge with an optional theme.  Can't wait to see what you create. The Lord is with you every step of the way so, don't compromise God's Word nor be afraid of the what the future holds based on your faithfulness to His Word.  Great is our eternal reward in heaven for us whose trust in not of the world but in Christ!

Ready to accept Jesus as your Lord and Savior? Find out how on the sidebar...